When I was diagnosed with breast cancer in September 2015, so many people told me about their friend, sister, cousin, aunt, mother, neighbor, etc. who also had breast cancer. With the odds that 1 in 8 women will develop this disease, and in Fairfield County even higher, it’s no surprise that everyone knows someone with breast cancer. It actually feels like an epidemic! But, one woman in particular kept coming up in conversation – we had the same pilates instructor and a publicist friend had become aware of her story from her news reports. I was drowning in treatments, surgeries and getting the foundation going so I never reached out. Finally, before this last slice and dice surgery of mine – I did. I am so happy to introduce this courageous young woman, who shared her story on air – and learned about her own diagnosis the day she was filming a segment on the topic: Renee Chmiel. 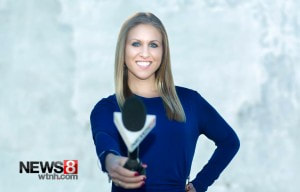 As a reporter at News 8 Renee is used to sharing other people’s stories, but she never expected she’d end up sharing her own. That story began in September 2015 when she found a lump in her left breast. Though she wasn’t someone who usually went to the doctor, something told her to have it checked out. At the time she was just 29 years old. The doctor told her not to worry. He said, “you’re young, it’s probably just a cyst. I’m sure it’s fine.”

She was sent for an ultrasound anyway, just in case, and then a biopsy. The day before the appointment she climbed Mt. Washington in New Hampshire, nearly getting trampled by a moose on the way down! She’d always been into health and fitness and never imagined she’d become a breast cancer patient before age 30, but that’s what happened less than a week later.

Ironically, Renee was working on a story about breast cancer at work on the day she was diagnosed. It was October – Breast Cancer Awareness Month. As she did her interviews and wrote her story she was waiting for her phone to ring to see if she had the disease herself. That call came that Friday afternoon: a positive diagnosis, a flood of information about doctors, and advice from the nurse to enjoy her weekend.
The weeks that followed were a whirlwind of doctor’s appointments, tests and decisions that had to be made. Lumpectomy or mastectomy? Would she be able to go on her planned trip to Iceland? Where did the disease come from? Exploring Iceland was a welcome respite less than a month before her surgery. At that time she was trying to make another decision: should she tell her story? Ultimately she knew she had to. If an otherwise healthy 29-year-old who was negative for both BRCA genes and had no family history could get the disease, it could happen to others. She never thought she had to worry about breast cancer, but now she had it. She wanted to let others know that it could happen.
Renee’s job as a reporter gave her a unique way of getting her story and message of early detection out. Her friend and colleague, health reporter Jocelyn Maminta, had offered to tell her story. Renee was now ready, though it would be one of the scariest things she’d ever done. Renee had her lumpectomy in December 2015. Jocelyn interviewed her at a doctor appointment the day before and again the day after her surgery as she recovered. That night she got some good news from her surgeon: the cancer was not in her lymph nodes.
Renee’s story aired on the 5 p.m. news on her first day back at work after her surgery. Watching it at home for the first time as it aired was surreal, scary, yet in a way, it gave her hope. She wanted other women – especially young women – to see it and know they had to be vigilant.
Her journey was not over yet, however. Further post-surgery testing would reveal her risk for relapse was a bit higher than she’d expected. The next month was the most difficult. She had to decide on the best course of treatment – and choose the oncologist who would manage it. The first decision: chemotherapy. Two of the doctors she saw recommended it because of her age. Three others were less adamant she go through with it. Ultimately, Renee decided against it.
She began radiation at Smilow Cancer Hospital in February 2016. She went every day after work, trying to keep her spirits and her energy high. She leaned on friends, tried acupuncture, exercised and, for the first time, wrote in a journal. After six weeks of treatment, she “graduated” from radiation on April Fool’s Day. A month later she began the third and final part of her treatment. All of the doctors she saw had unanimously told her she needed to go forward with hormone therapy. Renee’s tumor was fueled by estrogen, so to prevent a relapse she had to lower her estrogen levels to reduce her risk. She is now in menopause, and will be until she is 35 years old.
Renee celebrated her 30th birthday and her remission in July 2016 by visiting Peru with her best friend. She now speaks at breast cancer fundraisers and tries to spread her message of awareness and early detection to as many people as possible. It’s something that just might have saved her life.