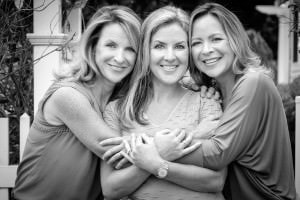 A few months ago I received an email from a photographer named Carey Kirkella. She had gotten my name from a fellow Ford Model of Courage, knew I had sisters, and reached out to ask if we would do a photo shoot for her upcoming book, “Sisters and Survivors” (see above). See more photos from our shoot on her Sisters Project Website.

Carey went on to tell me how she had lost her own sister to metastatic breast cancer and was very interested in what I was doing. She wants to support raising awareness and funds for metastatic breast cancer, the disease that took her sister’s life just 4 months after being diagnosed. Renee was a young wife, sister, daughter and mother and she was taken far too soon by this disease.

Wanting to both honor her sister and do something positive to help others with metastatic breast cancer, Carey states, “I realized that there might be something that would tie who my sister was into both my book product and the idea of spreading positivity. Soon before Renee passed away, she finally got what ended up being her dream job as the regional activities director for the Girl Scouts in Middletown, NY. Before she started working for them officially, she had started her own troop in her town because there hadn’t been a local one and she wanted her daughter Julia to have the opportunity to be a Girl Scout. She was very active in organizing all kinds of unique activities for the girls and it was especially important to her to help instill self confidence in them and to encourage them to try their best in everything they did. She had really been looking forward to me coming to a meeting to help them earn their ‘photography badges’ before she got sick. At Renee’s wake, a few of the girls from her troop were there and it was an amazing feeling to get a sense of how she had made a difference in their lives.”

Here are some notes about what happened leading up to her passing away in Aug 2013:

“Starting around the Summer of 2012, when she was still 39 years old, Renee started having a lot of pain in her back. She had had a weight problem for many years and just attributed it to that, or thought it could be a sciatic nerve issue. In January, 2013, she discovered a rash on her breast, which her doctor didn’t mention could be an indication of breast cancer. He did recommend that she go to her obgyn to get it looked at, but we’re not sure if she actually did or not. Most likely, she didn’t. Some of my family doesn’t have the best track record when it comes to going for doctor visits. My mother says that Renee told her the rash was getting better, so she wasn’t worried about it. Then in February, soon after her 40th birthday, her back was still hurting a lot so she went back to the doctor. He determined that she had a kidney infection, which could be causing the backache, so she took medicine for that for a couple of weeks. Since she was still in so much pain a month later, she had a CAT scan done and the radiologist found a mass in her back. She went to an oncologist and the test results showed that there was no cancer in her organs. What happened in the time between February and May is fuzzy, but in May 2013, she was diagnosed with stage 4 breast cancer (which had moved into her bones). They told her it was too late to try chemotherapy, and she started taking the medication tamoxifen.

Our mother took her to another doctor at Columbia, who recommended radiation, which she did for about a month. They were worried that her bones were going to break even if she did get better, so she started going to physical therapy. The first week was really difficult because she could hardly walk. The second week she was actually a lot better for some reason and we all got our hopes up that things were turning around. But by the third week she was having trouble breathing. Renee was stubborn and wouldn’t let our mom call her an ambulance. We think she knew she didn’t have much time left and that she didn’t want to die in a hospital. My mom contacted her doctor at Columbia who said that she might be getting a blood clot and that she should go to the hospital immediately. Renee refused, and hid her legs under a blanket while saying she would be fine. Her daughter Julia later said that she got a glimpse of her mother’s foot that night and that it looked like it was turning purple. On August 14th, my mom found her daughter Renee on the living room floor, and she was gone. The EMT people said that she died peacefully and without a struggle, but it always makes me incredibly sad to think about how she died alone. I’m grateful that her daughter, who was just shy of her tenth birthday, wasn’t the one to discover her, not that it’s been an easy memory for my mom to shoulder.

Renee had a beautiful, caring heart and I’m glad to have had her as my older sister. She always told me how proud she was of me, and after she passed away I met so many people who loved her, and I realized that I am forever proud of her too. I wish I had the opportunity to tell her that now, but I like to think she knows. There were a lot of butterfly sitings in the days after Renee passed away, the kind that were incredibly timely, which is a whole other story in itself. I hadn’t seen one of those big impressive orange Monarch butterflies all Summer, and then just after I said ‘that’s a wrap’ on my first ‘Sisters & Survivors’ photo shoot this past August, one flew right past me. I really believe that was Renee’s spirit visiting for a moment and saying ‘hey, good job little sister. I like this project.'”

Carey is trying to raise money to make this self funded project happen, and do these portraits at no cost to the ‘sisters and survivors’. See her CrowdRise fundraiser and learn more about her project at http://www.sistersproject.info.

Renee died from metastatic breast cancer so soon after being diagnosed, it feels like she never even had a chance. I want to honor her memory on this day, October 13th, metastatic breast cancer awareness day – as a reminder of how quickly cancer moves and how quickly we have to keep working to eradicate it.
I’m sure Renee would have been incredibly proud of what Carey is doing. She is an amazingly talented artist who knows how to cultivate and capture beauty in all things, even this tragic loss. Carey has decided to generously donate a portion of the proceeds from products bought through the cancer couch shop on this website, to the foundation. Check out her very cool custom “signing books” for graduates. See Carey and Renee as teenagers below: 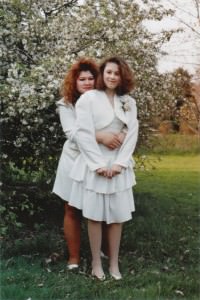