Dr. George Stohr is a radiologist in Hartford, CT and the proud father of the beautiful and sweet 10-year-old Alexandra. He is also a widower, the surviving spouse of Samantha (Smith) Stohr. Samantha died of metastatic breast cancer in October 2010. This was 13 years after her original diagnosis at Stage 2 when she was just 26 years old.

I am 1000% certain that I have never and will never meet anyone quite like Samantha (Sam to me).

She was one of my sister Vivian’s best friends and became instantly like another older sister to me when we all met in college. I looked up to her in every way and went to her for advice on everything from boys to bras. She and I (and other amazing pseudo-sis Coll) even went on Spring Break together without my real sister (I thought I was all that and a bag of chips being asked to go sans Viv).

We could barely afford the trip-so we chose to “share” a hotel room with 2 complete strangers to get a discount – um…really?! I was just so happy to be traveling on this adventure with them as my own person, not an appendage – “Viv’s little sister”  –  that I didn’t even care about shacking up with 2 potential serial killers. Nor did I care about the fact that the 3 of us had to cuddle up in bed together, terrified, fully clothed, holding our bags on top of the covers – ready to run, while we stared fearfully at the two heavily made-up, ambiguously gendered individuals in drunken-slumber, snoring loudly in the bed 12 inches away from us –  too scared to sleep for 5 nights and 6 days … Nope. I didn’t care. I was happy as a clam and just thought it was the coolest thing ever because I was with Sam. Everything about Sam was so cool, without ever trying to be. Cool, empathic, always helping others. She may have even saved my life this year, even though she’s been gone for six.

Every day since I returned home, broken-hearted and depleted, from her funeral – I have been doing self-breast-exams. Every morning, before getting out of bed – it has been the first thing I do. That is why as soon as my tumors were detectable by touch, I found them. That is because of Sam. If this could happen to Sam – beautiful, kind, loving, healthy, nurse Sam – it could happen to anyone.

It could happen to me. And it did.

Sam was a nurse, which of course was so fitting because her entire being was focused on taking care of, and having concern for, other people. She was also one of the most stunningly beautiful women I’ve ever known. She always looked perfect, but never looked like she tried too hard to do so. Flawless skin, hair and cloths  – she was striking. She was the only one who didn’t think so. In fact, she was almost neurotically self-conscious – which is one of the many things that made her so endearing. Her outward beauty paled in comparison though, to the person she was inside. The best way to describe it is – when you talked to Sam, she made you feel like you were the most important person on the planet – and to her, you were. She also always made me laugh – no matter what the topic. She had a hysterically dramatic way of reacting to things that was so idiosyncratically Sam. She was so genuine, and so unintentionally funny. I loved Sam – as I guess you’ve gathered by now. I think about her everyday. I think WWSS? Not so much What Would Sam Do  – but rather – What Would Sam Say? She always naturally knew just the right thing to say in every situation. She was empathic and naturally nurturing to her core – which is why she made such a great nurse. It is also why it was so important for her to become a mother.

George and Samantha had only been dating for a year when breast cancer struck. So on top of having to deal with the terror of the illness, she had to contend with losing her hair and undergoing body altering surgeries at the young age of 26 in a new romantic relationship. She also had to deal with the issue of having children. Having a baby after a breast cancer diagnosis is an extremely personal and difficult decision for patients and their partners. This is something that many young breast cancer patients struggle with. Sam did all she could to treat her cancer and go on with her young life. She underwent a lumpectomy, followed by a mastectomy, chemotherapy, and 5 years of hormone therapy. Sam had been doing well during that time and always said she wanted to live her life “not just wait to die” said George. After all, she was only in her late 20’s going through all of this.

In 2002, 5 years after her initial diagnosis, – the timeframe that you are supposed to have a “sigh of relief” –  she had a local recurrence in the chest wall.

Scans revealed it was only a local recurrence, not metastasis, and she was doing fine. George says they lived their lives in 6 month increments at that time and tried to just keep on living. Two to three years passed, and after much deliberation amongst themselves and Samantha’s doctors, they decided to get pregnant. Alexandra  – who shares the same name as Sam’s wonderful surgeon, Alexandra Heerdt of Memorial Sloan Kettering Cancer Cancer, was born in 2006. George says the best Samantha ever felt was when she was pregnant. Pregnancy agreed with her both emotionally and physically. I remember that time. She was so happy. In 2007, 10 years out from her initial diagnosis, things were going well. George was working as a radiologist, they had their beautiful baby girl, and her health had been stable with no change since the chest wall recurrence in 2002.

Time continued to pass, and they were enjoying young married life with their wonderful new daughter, in their beautiful new house, near George’s work. It was November 2009 when they moved in, and they were still getting settled in February 2010 when George received a call from Samantha that he will never forget. He was bringing home pizza for dinner. It should have been a regular, cozy winter night in their new home. The kind of night that we all take for granted. This night would be anything but normal for them and would change this little family’s lives forever.
​
Samantha told George her bloodwork was abnormal…he is a doctor…he knew enough to know.

They repeated the bloodwork. Her liver function was elevated. Next was a PET scan. The cancer routine. The cancer was in her lungs, liver and bones by this point. It was very advanced and she had pleural effusion. They put her on an Aromatase Inhibitor and bone strengthener. George knew the prognosis. Samantha remained optimistic. She went back on chemo but was declining and in a lot of pain. My heart broke for the millionth time when George recalled their last vacation. They went as a family, to Aruba, one of her favorite places. It was awful, George states, she was in so much back pain – he was on the phone the whole time. That summer she was in and out of the hospital, up and down, wiped out, in so much pain, and trying to hide it from their now 4 year-old daughter.

Samantha had originally been treated at Memorial Sloan Kettering Cancer Center by Dr. Clifford Hudis, but once they moved near Hartford, CT – she sought treatment closer to home. Although she often saw him as the bearer of bad news and the scapegoat for her feelings about the cancer, it was here – where things began – that she wanted to return at the end. George describes the attention to detail and care she received throughout her treatment with this very well-known oncologist. He said Samantha would email him sometimes 50 questions, desperate for answers and something that would save her. Dr. Hudis responded to every one, every time. When they left their home to go back to NYC to bring her there, back where it all began, they both knew she would never be coming back.

George recalls those heart wrenching days and nights, trying to be in two places at once. He slept in Samantha’s room many nights until 5am then drove home 2 hours to get Alexandra off to school. He was exhausted and torn, back and forth between home and the hospital, always feeling like he should be in the other place no matter where he was – with his dying wife, or his young daughter about to lose her mother. The day before she died, he stayed with her all night, and then Samantha was gone.
I asked George if there was anything else he wanted to share about his experience with others going through this. His advice was more for those who may know someone going through it. He didn’t really reach out to anyone or seek professional counsel when this was going on and was often irked when this was suggested by well-meaning individulas. First of all, there was no time for therapy with a sick wife, young child and job to manage. Second, no one gets it. Nobody knows what the intimate conversations are like between a dying spouse and their partner. No one really gets what it’s like to lose the love of your life, the mother of your child, in the prime of both of your lives. There will be plenty of time for counseling later.

It’s true. People often don’t get it and they say stupid things, unintentionally. However, George says one guy got it right and we can all learn from him: There was an insurance man that Samantha really liked. A real New Yorker. He was nice, helpful and funny in dealing with a confusing process for her. Six months after she died, George received a bill for this insurance and he had to call the guy and tell him Samantha had passed. There was complete silence on the other end of the phone, and then he came back on – in his heavy, Brooklyn Italian accent –  with the most prophetic, on-point response George had heard yet:

Thank you for sharing this George. I love you always Sam. 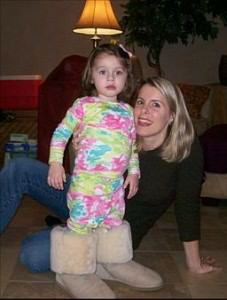