August, 2015: I was in Paris, delighting in finding a champagne bar at the top of the Eiffel tower, and blissfully celebrating my 43rd birthday with my husband, son, and daughter, who was turning 10 the same day (we share a birthday down to the minute). I returned home from this epic trip, refreshed and ready to return to my life, the kids’ school year, my beloved neuropsychology practice, colleagues, patients, friends and family. I had, by all measures, everything I could have ever wanted and then some. 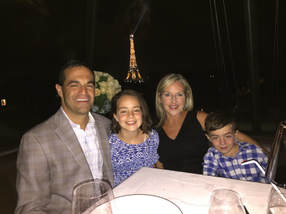 What I actually returned to, however, was an advanced, life-threatening, breast cancer diagnosis. Rather than return the following week to the practice I’d worked so hard to maintain and build, I was thrown head first into a world of biopsies, bad news and botched attempts at my last name. I was swiftly reduced to a medical record number and date of birth. It seemed surreal. We were suddenly not talking carpool and dinner plans for Saturday night, but facing life and death discussions, treatment options, frantically searching for the best cancer facility, and booking a double mastectomy. I couldn’t even remember what I had previously considered a “problem.”
​
Having initially been diagnosed at Stage 4 and being told I had an average prognosis of just 3 years to live, I dropped to my knees when we received the miraculous news weeks later that it was not in fact in my bones. I was upgraded to Stage 3C, and given a chance at a cure (two years later my cancer did metastasize to my abdominal lymph nodes).