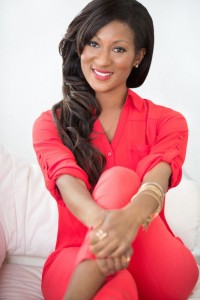 If you have visited our homepage recently, you will notice that we have partnered with an amazing organization called Tigerlily, founded by the amazing Maimah Karmo. When the incredible people at Tigerlily and I met, we all said a collective “Wow! This is a match made in heaven.” Tigerlily provides support and education services to young women with breast cancer, but they do not fund research. The Cancer Couch Foundation only funds research, but does not provide support services. We are the perfect compliment to each other. However, our simpatico did not end there. I learned that Maimah also started Tigerlily Foundation while she was going through chemo, just as I had started The Cancer Couch while going through my chemo. OMG, I’m not the only crazy one! I can’t tell you how comforting that was to discover. Maimah seems to be cut from the same cloth – all action! We are so thrilled to be working together to make real change in the breast cancer world. I could not be more proud to introduce my friend, Maimah Karmo, to The Cancer Couch followers:

On February 28, 2006, at 4:45 p.m., Maimah was diagnosed with Stage 2 breast cancer. She had no family history of breast cancer; and was only 32-years old. While undergoing her second round of chemotherapy, she made a promise to God that if she survived, she would live her life in service to others, and create an organization to educate, empower, advocate for and support young women affected by breast cancer. After her second treatment, Tigerlily Foundation was born. Beginning in chemotherapy, Maimah grew Tigerlily Foundation from a concept to a national organization, with hundreds of volunteers nationwide, providing breast health, wellness and transformational programs to young women across the country.

In 2010, she received the Congressional Black Caucus Leadership in Advocacy Award, and the Running Start “Women to Watch Award”. In October 2011, Maimah was appointed to the Federal Advisory Committee on Breast Cancer in Young Women, a committee established by the Affordable Care Act, on which she works to develop initiatives to increase knowledge of breast health and breast cancer, for women under the age of 40 and those at heightened risk for developing the disease. She is regularly called upon to speak at/moderate panels on Capitol Hill, as a leader in the world of breast health, in addition to being a speaker at various leadership events focusing on women, youth, health, wellness, politics, advocacy and empowerment. Maimah has dedicated her life to transformation women around the world. She has travelled to the Caribbean to conduct breast health education campaigns. As a native of Liberia, West Africa, she is committed to educating women around the globe to educate women of color, minorities, those facing disparities, and women of all races and ethnic groups about health, wellness, prevention and advocacy.

She is an author, and speaker, and she has appeared in various media outlets, to include O, the Oprah Magazine, Essence, Ladies Home Journal, Cosmopolitan, Seventeen, Good Housekeeping, Harper’s Bazaar, Marie Claire, Redbook, Traditional Home Magazine and Cancer, Cure Magazine and more. She has also been featured on Fox 5, ABC 7, CBS, the Oprah Winfrey Show, OWN Network, Good Morning America, The Today Show, MSNBC and national radio stations. In 2009, Maimah was awarded a L’Oreal Paris’ Woman of Worth award, among others. Most dear to her heart is her 14-year old daughter, Noelle. Noelle is now an advocate in her own right, hosting a national event, , called Pajama Glam Party, where she engages girls to become advocates and to have healthy lifestyles. She speaks to the media and is interviewed on her perspectives on youth advocacy, girls health, and leadership.

In 2010, Maimah published her memoir, Fearless: Awakening to my Life’s Purpose Through Breast Cancer, which was a best-seller. She is a sought after speaker, presenter and panelist. Maimah is also a Huffington Post blogger. In 2013, she founded Bliss Magazine, a quarterly publication that inspires others to live their soul purpose. She also hosts the “Pure Bliss” podcast on Itunes, monthly “Bliss Brunches” and quarterly “I AM Bliss” events, empowering others to live their soul purpose.
​
We look forward to doing great things together Maimah and Tigerlily! And thank you so much Maimah for normalizing the experiencing of starting a foundation while going through cancer treatment! You are dangerously close to making me look normal!!!