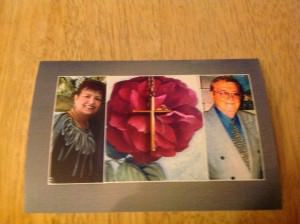 One of the most rewarding aspects of having this blog and foundation is that I hear from people all over the world who share their amazing and touching breast cancer stories. It reinforces how connected we all are no matter what race, gender, religion or nationality. We all want to live, thrive, love, and be loved. Cancer threatens all of those things, so we all react in a way that works for each of us. I am honored that Cathy Esposito has entrusted me with her amazing story of a special bond with her dad that continued even after his death…

Cathy was extremely close to her father – a kind, funny, generous man. He was not feeling well for some time, and Cathy stepped in and took charge of his health care. After seeing many specialists, sadly, he was diagnosed with metastatic liver cancer in April 2006. Just three weeks later – he died with his loving family by his side. A week before, Cathy’s dad said to her, “Thank you so much for everything you have done for me, someday I hope I can help you.” She now understands what those words really meant.

When her dad passed away he had four pieces of jewelry that he wore everyday, and the family thought they should go to each of the four siblings – his children. Cathy received a gold cross which she keeps on a chain close to her heart…little did she know it would end up saving her life.

In October 2006, Cathy went for her annual mammogram and, as usual, got a clean bill of health. A few weeks later, her father’s cross got stuck in her bra. When she went to pull it out she felt a lump in her right breast. She immediately thought, “Dad, are you trying to tell me something?” Well, indeed he was. She went for an ultrasound and biopsy and found out, despite the “normal” mammogram findings, she did have breast cancer. Her family was devastated after just grieving the loss of their father to cancer. Cathy then had her left breast checked and it showed only some benign cysts – so she had to make the decision herself of whether or not to remove both breasts or just the right one. Well, dad to the rescue again! She woke up one morning while struggling with this decision and felt pain in her chest. When she lifted up her shirt she saw indentations from her father’s cross on both breasts. “Thanks dad, I got the message,” she thought. Both breasts had to go, she made up her mind.

Well, if you have been following this blog, you know that unfortunately the story does not always end there – 30% of those with early stage breast cancer eventually develop metastasis and are re-staged at Stage 4.

In 2010 Cathy woke up and the indention of his cross was, yet again, in the middle of her chest. She immediately went to see her oncologist and said, “My cancer is back.” She told him why, but of course he thought she was nuts and dismissed this notion (she now has a new oncologist by the way!). She asked him to do tumor markers and sure enough – they were up, to his surprise. He said “Let’s wait another 3 months.” In 3 months the markers were up again, so they did a scan. However, this doctor let an intern read the vitally important scan, and it was read wrong. She was told it was all clear! Cathy knew something was wrong, and this -THIS was not right. Due to her amazing bond with her father, which had not failed her yet, she unfortunately knew in her heart of hearts that the cancer was back and threatening her life. She made the decision to go to Memorial Sloan Kettering Cancer Center (that’s where I go!), and they confirmed that she did in fact have metastasis in her pubic bone. UGH! She was re-staged to Stage 4. Once again – her dad to the rescue – as she could now get the treatment she needed. Truly, utterly amazing
​
Cathy thought, and I could not agree more, that this would be a wonderful, beautiful, miraculous Christmas story – and it really is. Here she is, 6 years since that Stage 4 diagnosis, and she is thriving. Her motto is F^&% Cancer – so you can see we are cut from the same mold and I loved her instantly when she reached out. Cathy is so grateful for all the love and support she had while going through treatment and surgeries. However, she is most touched knowing that her incredible bond with her father did not end when he died.

In addition to spending time on her favorite hobby of saying “F Cancer” multiple times a day, Cathy also wants all women to know how important it is to find out if you have dense breasts and to advocate for yourself and follow your gut. Doctors are not always right. If you do have dense breasts, it is now mandated in 28 states that you are told and get both an ultrasound and mammogram – thanks to our amazing CT native, Dr. Nancy Cappello, who started the Are You Dense Organization. Connecticut was the first state to put this through legislation and make it a law in 2005. Two thirds of pre-menapausal women have dense breasts by the way! This was the case for me, and I had just received my 4th “normal” mammogram letter mere weeks before I felt my own lump. I can not stress how important self-exam is ladies – and gentlemen – men get breast cancer too – Male Breast Cancer Coalition!!
Thank you so much to Cathy for sharing that incredibly touching – and informative – story! Our love, prayers, and healing, positive vibes are with you always. Your dad sounds pretty special to me, as do you! F&%$ That Cancer Cathy!